I'll admit it. I sandbox on Facebook. I guess it's one of those feedback things, erm, idea-exchange; rather than shrieking ear-buds when the jack breaks off the headphones and I'm trying to set monitor-levels for a vocal track. As I said on Facebook:

Bone-Dry Slit - Song
Posted by Morleychallenged at 10:37 No comments:


I rendered this video without editing, and discovered many things. I recorded this video with Vocoscreen. The JACK audio server doesn't need to be a whore to something calling itself Pulse Audio, within Linux. I will warn you. My Spanish doesn't exist. I am neither Spanish nor Mexican.

I may become able to use Vogoscreen without forcing myself to acquire impossible skills in KdenLive, or attempt an inadequate audio rescue using Audacity, but, no promises. If only the microphone is a problem, that might be a tell.
Posted by Morleychallenged at 02:06 No comments:

I try not to overdo the comic patter on stage, but sometimes I have reasons to introduce a song a certain way. For evidence I present the following:


Now, really all of this isn't something to become self-conscious about; more than, say, this blog would make of anything. After-all, singer-songwriters are frequently sociable, gregarious folks who can little-afford to estrange ourselves over something as trifling as our struggles with another dead guitar-cable, or a dying pair of headphones and some geeky software struggles. I guess the key to everything is persistence. I ended up using Audacity to fix that video but I'm not uploading the bloody thing again. I'll save the wisdom for the next one.

Meanwhile, I get a song to this stage of production in three days, from the moment of deciding to trap myself in a cheap drum-groove. I guess I might as well start doing a bunch of them.

This isn't so much about how to do something which should seem as simple as tying a shoelace. Once the elastics on a microphone cradle break enough times, a guy can get kinda tired of half-assed solutions that result in baldness for people who don't have hair as stubbornly un-removable as mine. I finally got it right.

A hank of shock-cord from the dollar-store that I'll never run out of now adds itself to the spool of cord that I make cable-ties out of, and a bundle of 550 para-cord, in my accessory trunk.
Posted by Morleychallenged at 13:07 No comments:

How Many Way Can We VeeJay in Linux?


I might add commentary to this soon. I've been up all night, though. Too many things.
Posted by Morleychallenged at 03:40 No comments:

Video for "Screencast With Quality..."

Most of the dirty details are on the video page on YouTube. Audio is out-of-sync with video (longer) but I finally got the video done. I tried to fix it but all I could do was break it more. I'll run with it for now.


I finally got the video as fixed as I could get it. Running JACK at 44000Hz into video software which presumes 48000Hz is kind-of a recipe for grief. I'm done fixing it. Phew.

UPDATE: I used Audacity to make the audio mix better, instead of of wasting a learning-process on KdenLive; but I doubt I'll waste any effort uploading it, since I'm giving birth to a song at the same time. There are only so many programmers in the world, and only so many artists, and too-many projects. I'm not a programmer, but I know that about people.
Posted by Morleychallenged at 01:02 No comments:

Screencast With Quality? I Must Get Past the Block, Even With a Clunker Laptop

I focus on audio, but after having endured a decade of repetitive newbie instructional videos, I have decided that market is almost adequately covered and I can be clever enough to stay out of it.

Meanwhile, I am adapting to becoming able to begin again within a distorted socio-economic context; and I am still not even close to clever enough to avoid inflicting an-eyestrainful like that while becoming able to write what I intend to say, or at least write. This is evidence to me that I have foolishly dug in to a battle with upgrade cycles again, while also battling with aquiring new skills. I never claimed to be wise.

I decided, after reviewing many websites and videos, to begin using the Ubuntu MATE IDE today. I also decided to begin learning to make Screencasts as well as my BIOS mongering clunker of a laptop can cope with. It even has a touchscreen. If it claims to bear Altec Lansing audio components, I will ignore that as often as possible by now, and so will Hewlett Packard by now.

This is the QJackCtrl workhorse of the Jack Audio System. 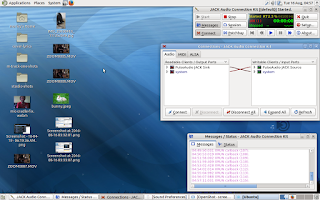 I have used this program as the basic jockstrap of every refugee studio I have tried through a dozen songs, half a dozen laptops and half a dozen cities, while evading two ex-girlfriends, all of my ex-friends and family members, and lynch-mobs from everywhere in the world. It is the definitive test of everything I do in media production on a Linux computer. It tells me if all of the other programs are playing fair or they need to be sent to my office to become told to become more obedient to QJackCtrl.

This is my Current Sound Control System Setting Tool. 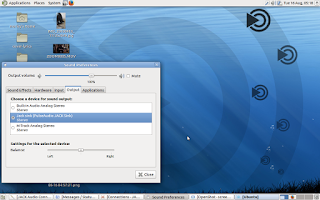 Every IDE has one. After I became frustrated with Xfce and became persuaded to try the MATE Desktop Environment, I discovered that this particular tool performed somewhat different functions from that of the Xfce tool, as with MATE's Gnome2 legacy tool. Within this particular tool provided by the MATE Desktop Environment, Pulse Audio Jack Source must be the Input, Pulse Audio Jack Sink must be the Output, and it seems other settings can almost be ignored; although some fiddling becomes necessary with every one of them every time, currently.

This is the OpenShot Non-Linear Video Editor. 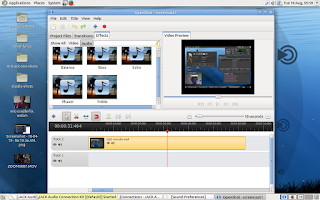 This would not ordinarily be the first thing I would mention at this point, but I have published a video with it previously without crashing everything, and I am willing to stick with it for solving certain problems related to video editing. It sucks at talking to JACK, but maybe they will become inspired to at least offering basic connectivity without ruining the program attempting to do everything at once.

This is the Mess I Made Using OpenShot to get me out of the Mess KdenLive Made. 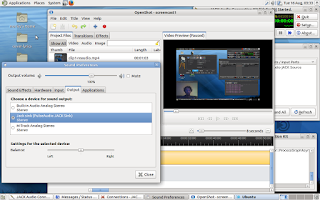 KdenLive wants to use all of the plugins it can find from LADSPA and perhaps even LV2 from the audiosphere, but it isn't ready yet if I am using a Gnome2 legacy desktop. I ended up using KdenLive to edit one clip and save it while my computer crashed more than it ever did getting that far. There's a price for courage.

This is Vokoscreen. Now I can do Desktop Recording.


This Will Work For Me.


I will be able to do screencasts without butchering the concept. Plugging a bunch of things into other things according to solutions other people suggested would not have helped me. In Vokoscreen, the webcam monitor is only the webcam monitor, and few things within the program try to be what they don't need to crash your computer trying to be. If I choose to edit Audio separately for some things, OpenShot will provide sufficient tracks that I can edit Video intelligently without asking any program to ruin too many jobs.

Ubuntu is in Transition.


Ubuntu and Debian stand among an admiralty of Linux Distributions. Considered among others who have expanded and contracted on the basis of their various pools of use-cases, each of such admiralties has felt the necessity of sustaining their legacies while drawing upon a contracting pool of talent. This is a beneficial thing.

If I prefer a power-tool which makes me an employable home audio-engineer with a tiny kit, I often find that I benefit from many other Linux resources including those pertaining to medicine and other sciences (don't laugh, I read x-rays not too bad).

All of open-source computing-environment distributions, have endured change in hardware, markets, and social causes of attrition among developers on all platforms. We are passing through a time in which familiar tools and memories of tools which broke in our hands, contribute to all of our plans for the future. Linux will change and they say that they know how it will change, but this has become a time for caution. I say this as a person who has become brazen about caution. Secretly, I am a General; and I have simply learned that I gain the most by the aggregate of my losses.

Posted by Morleychallenged at 06:12 No comments: